The full Budget Automation tool (BA) management power belongs to its manager (administrator). During the phase of the BA's creation, the functions of the manager belong to the BA Initiator. Afterwards any WebMoney participant can be appointed (selected) to be the manager provided he has a Passport that is at least personal.

Using the LLC LablePrint BA example, let's go through the process of appointing a new manager, the second co-founder of the company.

Before the start of the procedure of re-electing the manager, BA LablePrint has the following role distribution:

1. Nominating a candidate for a new BA manager¶

Any BA shareholder can be nominated for the post of manager if he owns at least one share. Therefore, the procedure of re-electing the manager is initiated by the candidate himself (in our case, the second co-founder of LLC LablePrint).

To set a vote on selecting a new BA manager, go to the Shareholder.ru site, the Votes section. Then in the "name" field select the BA, and in the "Suggest a vote" form, select the vote type, "appointing a new administrator". 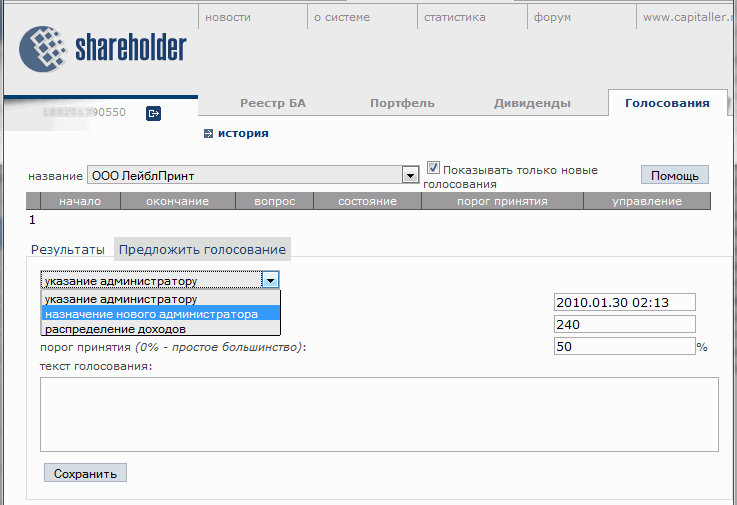 Next, specify the vote start date and time and the candidate's WMID, press "Save", 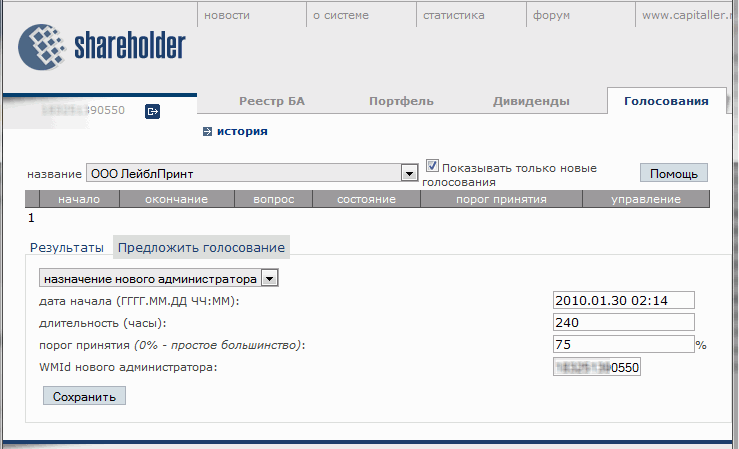 and confirm your intention.

Next, a new record will appear in the votes table. Before the start of the vote (in "pending" mode), the parameters of the vote can be changed or deleted (see the "management" column). 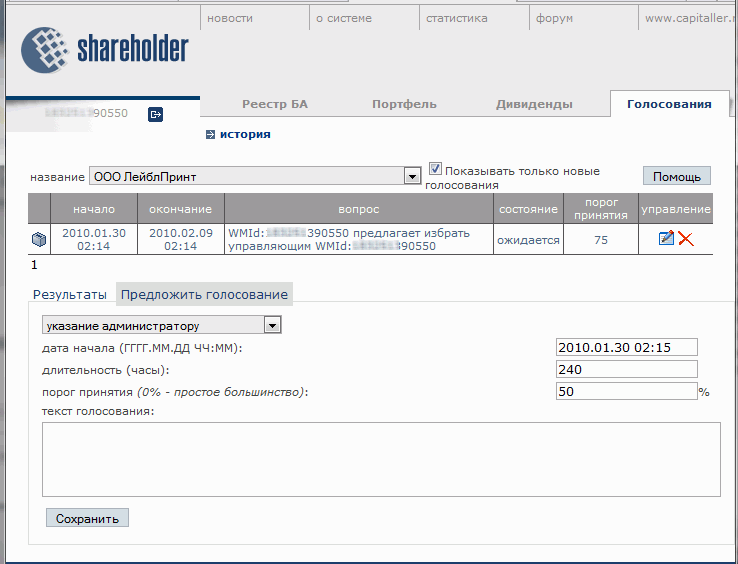 This type of vote can also be set from the BA. For that, go to the Shares--votes tab, select the type of vote, specify the start time of the vote and the candidate's WMID. 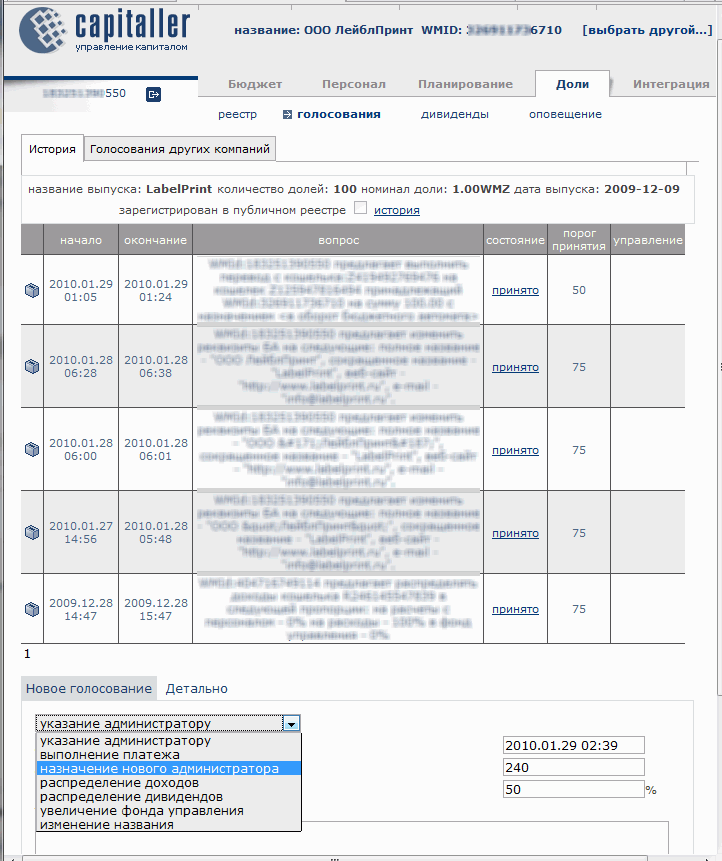 2. Holding a vote on making a candidate the new manager¶

After the vote is set, information about it becomes available on the Shareholder service to all BA shareholders (in the Votes--history section).

To participate in the vote, wait for it to begin (to be in "not finished yet" mode), select it, 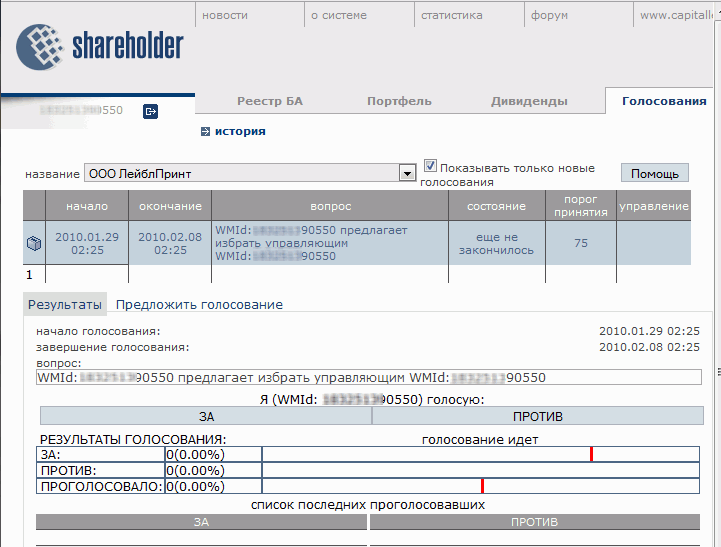 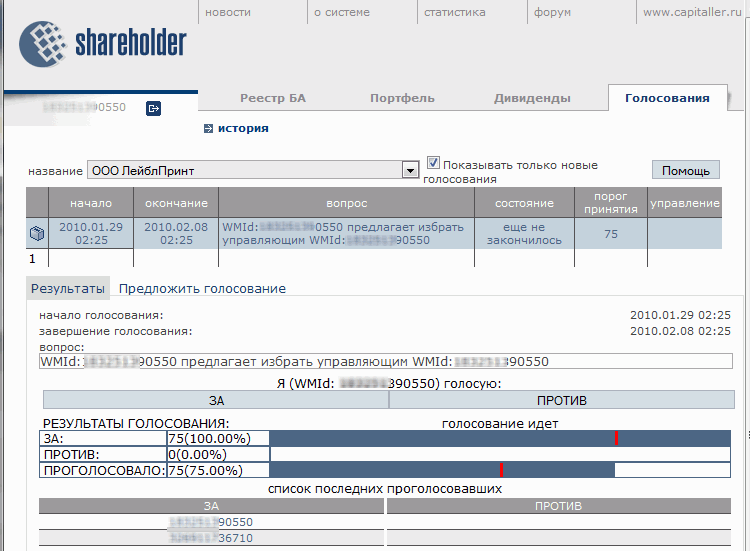 If part of the Budget Automation tool shares belong to his WMID, then any employee from the personnel with "full access rights to the [[2#webmoney:|Shares]] category can participate in the vote on behalf of the BA.

To vote for a BA WMID, go to the Shares--votes section, the "Votes of other companies" tab, select the current vote, and press "FOR". 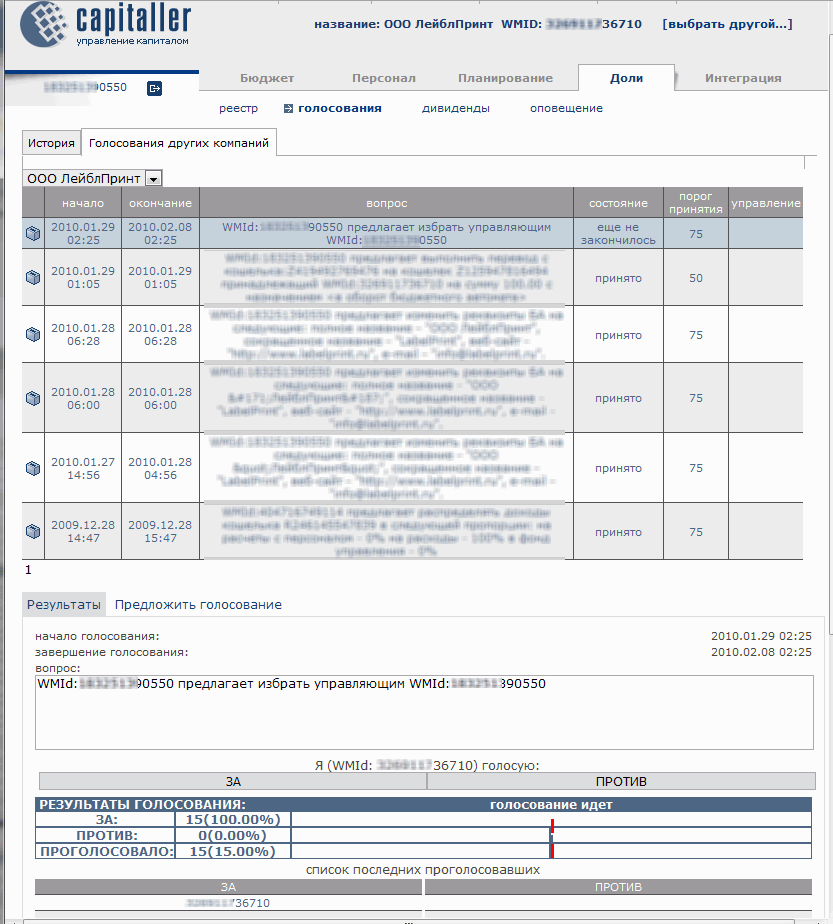 3. Administering a decision to appoint a new manager¶

When the conditions specified for the vote on changing BA requisites are met (75% of the votes are "FOR" out of half of the voters), then after a short vote count

the decision is officially made

and is carried out automatically (see the result in the BA section Personnel--list).

The new manager receives the highest possible access rights to the BA and his function in the peronnel list is updated. All of the former manager's rights are annulled and he can no longer access the BA.